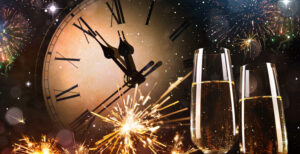 There can be a lot of pressure and hype around what to do on New Year’s Eve. Everyone wants to have a memorable night and alcohol often plays a big part in the activities, as it does throughout the entire holiday season.

The reality is that drunk driving is an issue all year round. But because of all of the parties and socializing during the holidays, many people are indulging in drinking and the chances of being in a drunk-driving accident are higher. Although the worst injuries are typically associated with drunken driving, emergency departments also see injuries from falling while intoxicated, resulting in broken bones or head injuries. Alcohol overdoses are also common, particularly among those under the legal drinking age.

Here are some tips for celebrating New Year’s Eve while staying safe!